One of the big questions at Prep entering the school year was, who was going to fill the void in the leadership role of the cafeteria? The decision the school had to make was either to go with another personal chef or a food service. One big name option in town was Metz Culinary Management. They serve several schools around the area, including Prep’s longtime college partner, Gannon University. After much research, Cathedral Prep decided to go with Metz to cater to Prep students, faculty, and staff. “The benefits of a food service are the reduced costs, they can get fresher food, and provide more options,” said Mr. Murnock, Cathedral Prep Principal.  With their reputation, Metz was an easy choice for the board. 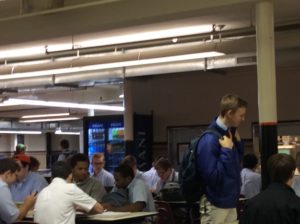 The transition to the new lunch system went relatively smooth; however, there were a few minor complications through the first week. With long lines and not enough food for the students there were gaps to fill. From a student’s perspective, it is nice to see the many options at lunch. There are a couple lines in the cafeteria that serve different varieties of food. At every lunch, Metz serves a soup of the day, a main entree, pizza, and an American option (hamburgers, fries, etc.).

When asked for a comment on the new service senior Blaze Konzel voiced a negative opinion, saying, “The new service is subpar. I hope administration realizes the mistake of last year. you never know what you have until it’s gone.”

Another senior Ryan Dyne stated, “I think that the new lunches have their advantages and disadvantages. I am a fan of the many selections they offer, but the prices are a little ridiculous. My biggest issue is the ranch. It needs to get the boot.”

On the other hand,Mr. Ladoucer said, “I like it. Very fresh,” expanding even more to add that he loves the nutritious values in every meal. When interviewing Tamara Sallot, the head chef for Metz at Prep, she was explaining how healthy and fresh the food options were. She exclaimed that it was so healthy, that she was actually cutting the fat off of a fresh chicken a couple minutes before the interview.

While looking into the future for Metz, they want to keep up the freshness of the food being offered and add even more options for the students of Cathedral Prep. Mr. Murnock also stated that they recently ordered a second pizza warmer because of the high demand for the product. Summing up the first few weeks of the new food service, one could say it was all about the money and the freshness.

Behind the Mike: Senior pursues passion for rap music