One of the bigger ‘hypes’ which that has been seen since the beginning of 2016, has been the emerging technology of virtual reality. Virtual reality is the use of equipment to artificially create sensory experiences, which include sight, hearing, smell and touch.

Within this article, some of the major companies working with this technology will be given brief reviews. There are hundreds of groups pursuing virtual reality, though some of the more funded projects certainly are shining above a lot of the other contenders. I’ll be covering two of the more advertised systems in this article.

The Oculus Rift is a Virtual Reality (VR) setup designed by Oculus VR from a Kickstarter campaign back in 2012. The project over a few years time of donations and backers from Kickstarter, the group has managed to raise $2.5 million dollars. Though in March 2014, Facebook purchased Oculus for $2 billion.

The Rift has an OLED display, with a resolution of 1080 x 1200 per eye. This more or less means that as you wear the Rift on your head, that the picture quality is high enough where it’d be very difficult to see each individual pixel which makes up the screen. 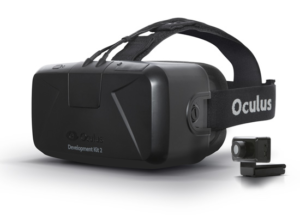 The Rift includes the headset (See left) and special controllers which allow you to move your hands, and it to be reflected as movement in any application the Rift will be compatible with on a computer.

Two months after being formed as a company originally, Oculus VR quickly released what they called the ‘DK1’ (Development Kit 1) – This prototype piece of VR was given to people who pledged $300 or more on Kickstarter, which was later sold publicly for $300 on their website.

While this technology was a little different than what is currently being produced now, it allowed game developers to get a head start in developing with the technology used. Because of this being released, a wide range of games with Virtual Reality support will be available once the development completed on March 28, 2016. The Rift is said to be one of the projects which started the dash for VR technology in terms of development. This piece of technology is being sold for the hefty price of $599! 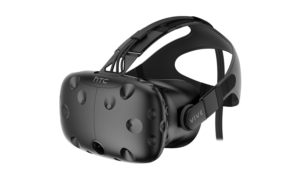 The second major piece of VR technology being developed is the HTC Vive. Developed by HTC in partnership with Valve, and recently released on April 5, 2016, this system is a little different when compared to the Rift, as one of the main features is to utilize “room scale” technology, in order to turn a room into a 3D space with the complex usage of sensors.

While it is very similar to how the Occulus Rift works, the Vive has been banking on this ‘one step up’ above the competing company to be sold on the market.

Seeming to create a trend with VR technology, the Vive is being sold on the market for the large sum of $799, which is said to be the biggest negative point with what the piece of technology has to offer. People do like what they see in regards to the quality rivaling the Rift, along with the ability to see your movement in a room. Though the price has been shown to turn away a lot of customers in pursuit of other options.

Virtual reality a more realistic, reasonably-priced option than ever before

Can listening to music make you smarter?