Friends come and go throughout one’s life, and they come from many different places. Some friends will be very similar while others will be seemingly very different; two people that some may think would never be friends because of an absence of likeness can become the best of friends. 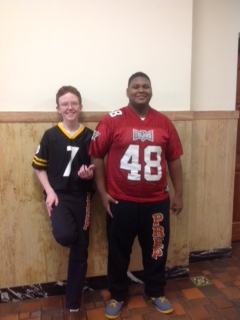 Such is the case with Sidney Jones and Daniel Scutella, two freshmen this year at Cathedral Prep. Without any classes together they met via being assigned to be study hall monitors outside of Father Jabo’s office. While walking past the pair, the two aren’t ones you would expect to hit it off and become good buddies, but it seems like they have.

Sidney, standing 5’11” and weighing 270 pounds, is of African American descent. Daniel, on the other hand, standing 5’9″ and weighing only 106 pounds, is a scrawny, red headed, freckle faced, and glasses wearing Caucasian. Some call him “Little Scuzz,” or just “Scuzz.” Sidney can put up 205 pounds on the bench press. Daniel, though, has never benched.

Aside from the difference in physical attributes, the two also have different backgrounds. Daniel attended St. Peter’s Cathedral Center, for which he still plays CYO basketball. Both his father and older brother attended Cathedral Prep. Sidney attended Holy Family. His older brother went to East High School. He told me he came to Prep for the education as well as for football. Sidney played on the freshmen team this past year.

Despite not knowing each other when they were assigned to their position, the two have become pretty good friends. Perhaps this can be attributed to the fact that they are in each other’s company every day, but the two told me they talk all the time about random stuff, anything and everything. If they don’t see each other over the summer months, they’ll be sure to catch up with each other once school resumes, they both told me.

Without trying to make a large overarching statement about racial relationships that I really am not qualified to make, I think this friendship is something we can all look at as something good and perhaps a model and inspiration for ourselves for future friendships. Both Sidney and Daniel could have gone into their study hall monitor position with prejudices and preconceived notions about their partner that, at first, may have seemed very different than what they were accustomed to.

It seems, though, that they didn’t. Instead of getting caught up in ultimately degrading and only negative stereotypes, they stayed open to the possibility of something new for themselves and were tolerant of the diversity they were presented with. Because of this, a new friendship was formed.

Favorite Prep memories from the senior writers of The Rambler

Help wanted for The Rambler

A Guide to the island of Saint John