Snow in April becomes a harsh reality for Erie, but hope looms in Easter break forecast

Everyone thought that we were in the clear. They thought that one of the worst winters was finally put behind us and we could finally start enjoying a much anticipated and deserved spring. Sadly, we were all wrong. Tuesday, only two days after the temperature hit 80°, Mother Nature decided to play a late, cruel April Fool’s joke on those who inhabit the North East region of North America. She dropped around an inch and a half of a disgustingly white substance also known as snow. One thing is for sure, Erie has received more than its fair share of snow this season. For those of you who don’t know it yet, Erie once again won the title for snowiest city in America. This is one title that those who inhabit Erie wish not to have won.

It is very depressing to witness such chilling temperatures and accumulation of snow this far into the month of April. The citizens of Erie understand that we will receive snow during the month of March and the months leading up to it. But receiving snow midway through the month of April is heartbreaking and cruel. Hopefully this is last of what feels like a punishment that old Mother Nature deals to us. 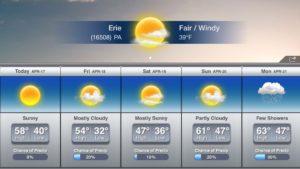 For as far as our trusty weather men can predict the weather, it seems to be not as warm as we all want, but it is starting to warm up. Things are also looking good because there is no snow in the forecast for the near future. For as awful as our winter was this year hopefully we have equally as long and glorious summer where the warm weather reaches long into the fall months of September, October, and maybe even parts of November

Gordon: The storm with a mind of its own tearing up the Gulf Coast, moving north