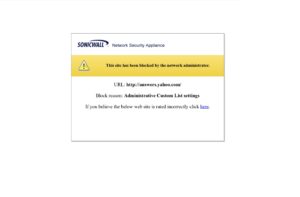 Many students at Cathedral Prep tend to chastise the technology center when they find some of their favorite apps and websites blocked. In fact, earlier this year The Rambler published a couple of articles with misleading information and misinformation. After doing some due diligence, there is a method to the madness of the technology center when trying to foster a healthy learning environment.

“Believe it or not, we want students to have a positive experience with the iPads,” said Mr. Kroh, technology coordinator of Prep and Villa. “We do not want the iPads or the filtering rules to get in the way of your education.” Mr. Kroh has had almost 20 years of experience working with the current version Prep/Villa uses to block sites and apps, known as SonicWall.

When in the process of blocking sites, Mr. Kroh has an outline of categories he is able to block easily, such as games and social media. Students sometimes are able to find apps that get around the SonicWall. Mr. Kroh attributes most of the requests to block these apps from teachers and sometimes even students themselves. This is when he needs to step in and work for a way to block the app. Mr. Kroh downloads the app on his personal iPad and let’s his computer track the traffic from the app, and then he is able to attack what URL to block.

“I don’t want to interfere with the kids’ education” stated Mr. Kroh. “The students can feel free to contact me or any other technology staff at Prep if they feel a site is wrongfully blocked.” Mr. Kroh explained the process of unblocking a site or app very simply as a quick conversation between him and the rest of the technology center, which resolves the issue in most cases.

The message is simple: if you have a complaint about a site or an app being blocked, do not hesitate to contact someone the technology center to explain your reasoning for why you need access to the blocked content in school.