May 28, 2016, is a day that will live in infamy. On this day, at approximately 4 p.m., Harambe, the beloved Western Lowland Gorilla, was shot and killed at the Cincinnati Zoo. The bullet was fired in an attempt to save a young boy who had fallen into the gorilla enclosure. Said boy was sitting in a moat of sorts when Harambe came to investigate. The 440-pound Harambe took hold of the child and began to drag him around.

It’s unclear whether the gorilla was attempting to help, harm, or simply move the tiny human, but zoo officials determined that the way the kid’s head was banging against the concrete was ultimately a danger to his life. They also knew that Harambe was so strong, truly a god of a gorilla, that he may not have known his own strength and could’ve even hurt the child on accident. Due to these factors, zoo staff decided to shoot and kill Harambe, saving one life, but ending another. This pulling of the trigger has become known as “the shot heard ’round the world.”

The incident garnered a great amount of media coverage, featuring a cell phone video of Harambe dragging the little boy around on televisions across America. The persistent coverage grasped audiences, and public outrage soon followed. A lot of people thought that Harambe seemed to be attempting to help the child, and therefore did not deserve to die. Many citizens claimed that a tranquilizer dart should’ve been utilized instead of a bullet as to save the gorilla’s life.

Zoo officials stand by their claim that a tranquilizer dart would’ve taken too long to take effect, and that the provocation could’ve angered the animal. Others blamed the boy’s parents, stating that responsible parents would’ve kept a better eye on their son and not allowed him to fall into a gorilla exhibit in the first place. I personally find it unsettling that Harambe was only 17 years of age. In fact, Harambe died just a day after his 17th birthday. As a 17-year-old myself, this fact strikes a chord with me. Only the good die young, I suppose.

Harambe died four months ago, yet he is still a constant topic of discussion. The last incident to get this much attention on the internet was Ariana Grande licking that doughnut. Why is Harambe still so current?

The obvious answer is the memes. Harambe’s passing has inspired hundreds—if not thousands—of memes commemorating his death. The joke seems to be that the more sincere the expression of grief for the deceased gorilla, the funnier the meme. One popular catchphrase suggests that people should expose themselves and partake in public nudity for Harambe. Many internet users have utilized the term “Harambae,” suggesting that Harambe is their “bae.” Bae is a slang term used by millennials meaning “before anything else.” This term suggests that Harambe is the most important thing in the world to them.

I miss him so much.

One person tweeted a word search with the caption “the first name you find is of someone you miss dearly” and the only name in the word search is Harambe. There’s a popular video circulating on Twitter that depicts several animated gorillas dancing to a remix of The Fray’s “How To Save A Life” with the caption “Harambe’s funeral was lit.”

Memes collide in this humorous depiction of Phelps

Memes collided when the Olympic photo of Michael Phelps making a grumpy face was made even more hilarious when one Twitter user captioned it “When she says Harambe was just a gorilla.” These memes have brought people together, and for that, we thank you Harambe.

If you’d like to see some of these infamous memes, simply type “Harambe memes” into the Google search bar and your eyes will be flooded with a plethora of gorilla-related jokes.

Similarly, the Cincinatti Zoo’s Twitter account has been plagued by sassy direct messages concerning Harambe’s passing. One that has stuck in this reporter’s mind is a DM exchange that went something like this:

Many similar messages have been sent to the Cincinatti Zoo’s account, so much so that they were prompted to delete their account for a short time. They sent out a tweet asking that the Harambe memes be put to a stop, as they were still grieving the loss. This tweet had little effect on Internet users, and may have even instigated more memes. These memes are still funny to this date, so they’re not going anywhere. Harambe’s relevancy continues. 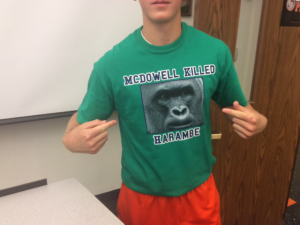 Along with the comical memes, Harambe is relevant for two more reasons: the effect he has had on gorillas and the effect he has had on people. His effect on the other members of his species is not widely known or even thought about, but it is an undeniable truth. Harambe’s death brought arguably more attention to gorillas than ever before. People were very upset by his early demise, and it can be assumed that they would not wish this fate upon any gorilla. This seemingly new popular interest in the magnificent apes should spark conservation efforts across the globe. Gorillas face poaching and loss of habitat as two major consistent threats. Harambe’s death may inspire more people to care for gorillas, causing people to stop harming gorillas, making gorillas happier and safer. Harambe may have lost his own life, but he may have saved the lives of hundreds if not thousands of other gorillas in the process.

Likewise, Harambe’s influence expands past the barriers of species. Mankind has been undeniably affected by his death. These feelings of grief and sadness can be seen online, but I decided to dive a little deeper. I spoke to a few people who felt particularly blown away by Harambe’s story.
To start, one reason for mankind’s distress is that Harambe forged a very delicate emotional connection with many people. Senior Nick Frisina said, “There’s a Harambe-shaped hole in his heart that only Harambe can fill.” I hate to be the one to say this, but I don’t think that hole will ever be filled. There will never be another Harambe.

Fellow senior Trey Dietrick stated that “Harambe is life.” In a sense that is true. Life is the only thing we know; therefore, life is everything, and most can agree that Harambe is everything. However, Harambe is not life. Harambe is death. He’s dead.

For others Harambe’s story has served as a source of motivation. Junior Alec Thomas, quite the talented swimmer, stated that he actually doesn’t like swimming, but he “Does it for Harambe.” The Cathedral Prep swim team can partially thank the deceased primate for some of their success this upcoming swim season. As for me, Harambe’s passing has affected me in a way that no gorilla death ever has, and I know my share of gorillas.

Due to copyright issues, no actual photos of Harambe could be used in this article. However, a quick google image search shows that Harambe was indeed a handsome gorilla. His model good looks make him a stellar specimen.

Fortunately for us, as one gorilla leaves the world, another enters. A zoo in Jinhua China recently held a naming contest for their newborn gorilla and the name “Harambe McHarambeface” won out. Some believe the voting was rigged by Internet pranksters, but regardless, the vast majority of mankind would agree that the right name has been chosen. The Philadelphia Zoo is also holding a naming contest for their newborn gorilla, but is not accepting write ins and has reportedly ruled out the name Harambe. Philadelphia just doesn’t get it. Stick to cheesesteaks, Philly. Gorilla naming is not your forte.

Now comes the time to answer our central question: Is Harambe still relevant? The answer is undoubtedly yes. Harambe has affected and continues to affect millions of people each and every day. His death, his memes, and his influence have guaranteed that this primate will be, at the very least, a topic of discussion for decades to come. No gorilla has, or likely ever will, become such an integral part of pop culture and American, nay, World History.

What defines a ‘wich?

1 thought on “Is Harambe still relevant?”