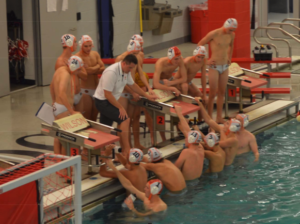 On Nov. 6–7, the Cathedral Prep Water Polo Team took part in the Pennsylvania State Tournament held at Wilson High School in Reading, Pa. Prep had taken first place in the Western Conference game the week prior after beating North Allegheny and was seeded third going into the the state tournament.

Prep’s first game took place Friday night against the sixth seed La Salle College School of Glenside, Pa., in a rematch of Prep’s 11-7 victory in October. Despite a slow start, Prep was able to put the game away with a 12-6 victory. In the win, sophomore Calvin Behm and junior Anthony Squeglia had three goals each, seniors David Rahner and Thomas Squeglia each had two, and one goal each from seniors Rex Riley and Patrick Steele. Senior Daniel Anthony had nine saves in goal.

The second game was against second seed Cumberland Valley of Mechanicsburg, Pa., in a match for a slot in the championship game. Prep had a 1-2 record against CV going into the tournament and was hoping to advance to the final game. Another slow start led to Prep down 3-0 at the end of the first quarter.

However, Prep was able to even the odds and tie the game at 5-5 at the half. Unable to keep up the momentum in the third quarter, Prep fell goals behind and was unable to outscore CV in the forth, resulting in a 8-11 loss. Riley had four goals, Behm had three, and A. Squeglia had one goal.

Following a loss from number one seed Wilson High School against four seed North Penn, the stage was set for a Prep-Wilson match for the third place slot. Prep had an 0-2 record against Wilson for the season, but both losses were within one goal. Being the home team, Wilson had a cheering section for the game; however, Prep had almost all the other teams at the tournament on on their side.

With a 5-3 deficit at the end of the first quarter, Prep was determined to not end the game like the last and produced a tremendous offensive attack with countless goals scored on both sides. With less than 30 seconds left in the fourth quarter, and Prep ahead 18-17, it looked as if victory was within reach.  However, a last minute turnover on a highly questionable ref call resulted in a last minute goal.
Tied up, the game entered two three minute quarters.  Knowing this would be the last game of the season—or for the seniors, their last game ever—the team was determined to put it away. Prep scored an additional four goals, while shutting out Wilson at the same time, winning the game 22-18. Behm had eight goals, A. Squeglia had five, Steele and T. Squeglia had three each, Rahner had two, and Riley had one.

For their efforts throughout the season, seniors Daniel Anthony and Thomas Squeglia were rated third team all state.  Junior Anthony Squeglia was ranked second team, and former rookie of the year, Calvin Behm was ranked first team all state.  Water Polo Coach Mike Doyle also was awarded the Pennsylvania Coach of the Year award.