A Tesla Coil is a special kind of electronic circuit developed by the scientist Nikola Tesla in the 1890s. On its own, it’s used to produce high voltage, low current, and high frequency alternating current electricity. While this may just seem like a jumble of words for those of us who aren’t electricians, the Tesla Coil has been used very frequently in schools, and in the entertainment industry as both an opportunity to teach people about electrical concepts. This device also can create tones of sound, making a unique show of electric energy, and music which is usually displayed in science centers, and sometimes during special public events.

These coils are even able to power certain devices wirelessly. The most common example, would be fluorescent tubes.

Scientists at Rice University in Texas, has discovered that the strong force emitted by these Tesla coils, can cause a special construct of Carbon called Carbon Nanotubes, to self-assemble into long wires. They have called this phenomenon “Teslaphoresis.”

One of the classic grade school demonstrations is where a teacher shows you how magnets either repel or attract to each other depending on what sides you try to put together. Using a modified coil that the students have built, they are able to separate each piece of this Carbon Nanotubes and give them two different charges. Positive, and negative. Both of these charges, much like the magnet experiment, attract to each other. With enough Nanotubes, the attraction fits itself into a lengthy wire which conducts electricity, without having to touch the materials itself. This wire also becomes ‘powered’ by the field the coil is emitting in the first place. 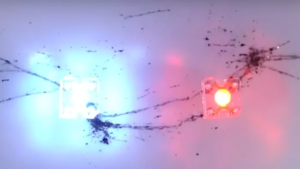 In one experiment performed by these students, nanotubes assembled themselves into wires, which formed a circuit connecting two LEDs. At the same time it drew enough power to light the LEDs remotely. (See left) The distance that this field can reach is surprisingly large. Merely using the prototype that they’ve built, they can remotely assemble and connect circuits together with a distance of multiple feet. It having been noted that with some adjustments, this wireless range could be improved quite a bit further compared to what they have been able to accomplish so far.

Can listening to music make you smarter?